Ok, I made a big change to the canvas.  I decided not to stitch the cute little toad like saying that was so much a part of the design.

Now, before you decide to tar and feather me or turn me into a toad here’s the deal.  I am a graphic designer by trade.  I love letters and letter forms, the shapes, the nuances, all the little details.

If I am designing a print piece I play with the leading and kerning and fiddle to make it pretty.  You just can’t do that on needlepoint canvas.  Well, you can but then your letters are 2′ tall.  I mean no disrespect to Sharon of Share One’s Ideas.  She did a great job designing this canvas.  There are however limitations to an 18ct grid and one of those limitations is the detail you just can’t get in lettering.

So being the compulsive type that you all have grown used to, I decided to take matters into my own hands.  A logo of sorts was born that will be mounted gracefully under the stitched shoes.  Now the shoes and the brooms and the frogs are center stage.

What you see below is the prototype of the concept.  A rough mat with the logo beneath it. 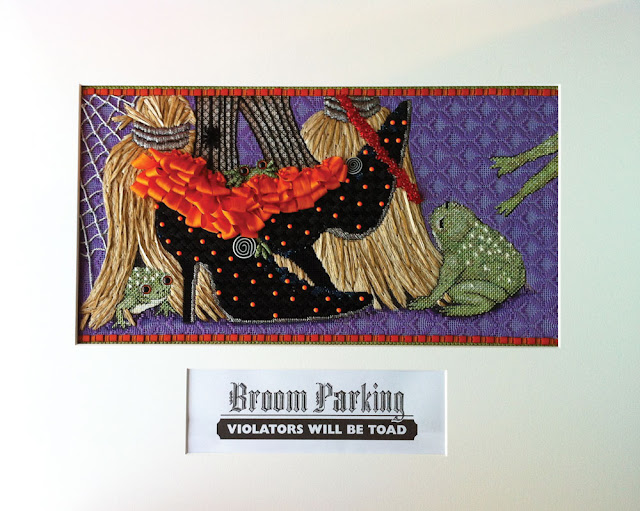 You have plenty of stitching time to decide whether you prefer to stitch your letters or not.  You have frogs to stitch!  The frogs are simple, just a single stitch to allow the painting to show through.  The magic of a very tiny outline backstitched in just the right areas gives them depth and form. 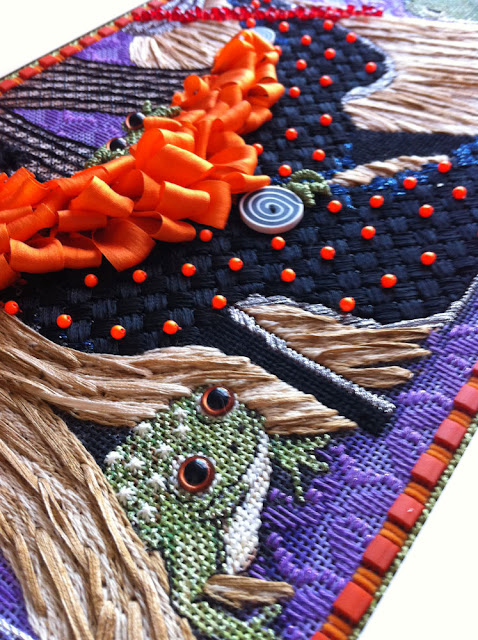 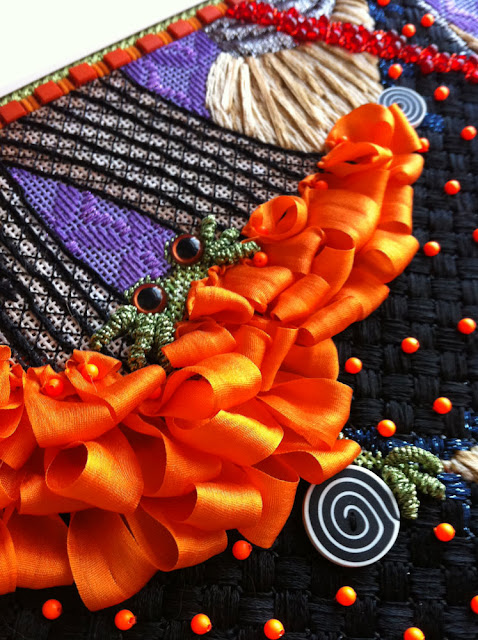 Our middle frog is kinda silly peaking out over and between the ruffles. Look at those toes!

I do love the borders on the canvas.  The orange border uses fun Tila beads as accents and beyond that there’s just a tiny bit of green background showing.

The plan is to send this off for framing using the logo in a second window on the mat.  But, maybe before it reaches the framer I will change my mind.  It’s been known to happen.  Maybe a pillow will be in my future with the saying embroidered on the reverse? We’ll both be surprised when I decide.

« Previous: The Fab Four with a Twist
Next: Are You ready for Snow? »

We use cookies to ensure that we give you the best experience on our website. If you continue to use this site we will assume that you are happy with it.OkNo Cookies For MePrivacy Policy